At the edge of the Russian wilderness, winter lasts most of the year and the snowdrifts grow taller than houses. But Vasilisa doesn’t mind–she spends the winter nights huddled around the embers of a fire with her beloved siblings, listening to her nurse’s fairy tales. Above all, she loves the chilling story of Frost, the blue-eyed winter demon, who appears in the frigid night to claim unwary souls. Wise Russians fear him, her nurse says, and honor the spirits of house and yard and forest that protect their homes from evil.

After Vasilisa’s mother dies, her father goes to Moscow and brings home a new wife. Fiercely devout, city-bred, Vasilisa’s new stepmother forbids her family from honoring the household spirits. The family acquiesces, but Vasilisa is frightened, sensing that more hinges upon their rituals than anyone knows.

And indeed, crops begin to fail, evil creatures of the forest creep nearer, and misfortune stalks the village. All the while, Vasilisa’s stepmother grows ever harsher in her determination to groom her rebellious stepdaughter for either marriage or confinement in a convent.

As danger circles, Vasilisa must defy even the people she loves and call on dangerous gifts she has long concealed–this, in order to protect her family from a threat that seems to have stepped from her nurse’s most frightening tales.

This was my first read of 2018. My mom had read it and recommended it to me around Christmas time. I have actually owned the book since it came out in early 2017. I bought it because I thought the cover was so beautiful, and since seeing the UK version I’m not sure which I love more.

This novel follows the main character, Vasilisa Petrovna, through her life and upbringing in medieval Russia, or Rus as it was called back then. Arden’s depiction of the time period and the way of life is absolutely amazing. I feel as if I learned so much about the way the people lived and about how Christianity was integrated into their way of life. For instance, to stay warm during the harsh winters the family had a sort of platform built above the stove in the house and that is where they all slept together to stay warm through the winter. Pretty cool, huh?

And out on the frontier the people actually believed in these types of guardians, domovoi, that watched over their house and animals. Like you leave scraps of food for the house domovoi to protect you and your family and you feed the stable one to protect and care for the horses. It was very fascinating to read about. And the domovoi reminded me of Calcifer from Howl’s Moving Castle which was cool.

Throughout all of this you’re also learning about the folklore, such as Morozko, basically our version of Jack Frost and his brother is basically Death. But the less people believe in them, the more they fade away. So when the church begins to rise to power in Moscow the domovoi and Jack Frost and the Bear begin losing their powers slowly as people convert. The church sees it as evil and giving into demons when the frontier people leave offerings to the domovoi.

And when this happens The Bear becomes stronger and evilness corrupts the land, turning all of the sprites and wood nymphs to bad instead of good. And as the story progresses you learn that Vasya is the only person who can help, because she has special powers that her grandmother had.

This novel actually leaves you with a bad taste in your mouth in regards to the church and it’s priests. Everything about them are corrupt and close-minded. And the Father who comes to Vasya’s town to convert the people is a really horrible person. It’s like he loves Vasya because she represents everything he cannot have, such as freedom and her love of the wilderness, but he hates her too. I think he blames her for tempting him, which is sick and twisted. And I didn’t like how her brother decided to leave to join the church because I really liked his character in the beginning of the novel so it was a shame to see him leave. I thought he would have stayed to protect the family and to watch over Vasya.

Vasya’s father also finds a new wife from Moscow when he goes to marry off his eldest daughter. He is already in the good graces of the royalty because his wife came from that family so they offer him a slightly “crazy” daughter for him to marry and take away to the woods. She’s actually related to his late wife. But you come to find out that she has been endowed with the same gifts as Vasya but she’s been raised in a place that shuns the domovoi and anything of the like so she thinks she is always seeing demons.

She hates Vasya because she sees that she is at peace with this gift and she assumes she is a devil-child instead of a normal girl.

I loved seeing how the family dynamics came into play during this time period. It was very unique and I feel as if I learned a lot. Not to mention this book also has a slight romantic twist along with a magical bird that becomes a sassy horse. It was a magical wintertime read from beginning to end and I devoured the second book as soon as I finished this one. The Winter of the Witch, the third and I think last installment in this series is due to come out this fall if I’m not mistaken. It’s one of my most anticipated reads for this year!

I gave this book 5/5 stars. It was wonderful and everyone should read it. A warning for younger/young adult readers though, it gets pretty dark. There are some graphic elements to this book, such as when they are describing this cultures take on vampires. It was much darker than I thought it would be but no less fascinating. 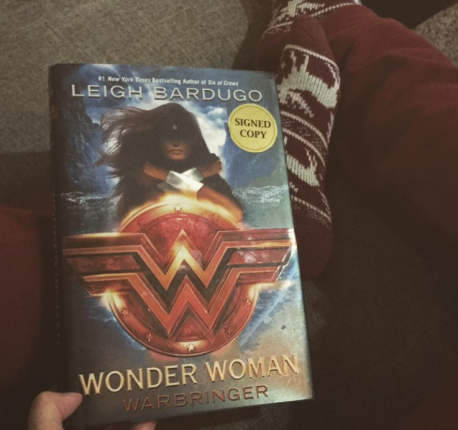 Princess Diana longs to prove herself to her legendary warrior sisters. But when the opportunity finally comes, she throws away her chance at glory and breaks Amazon law—risking exile—to save a mortal. Diana will soon learn that she has rescued no ordinary girl, and that with this single brave act, she may have doomed the world.

Alia Keralis just wanted to escape her overprotective brother with a semester at sea. She doesn’t know she is being hunted by people who think her very existence could spark a world war. When a bomb detonates aboard her ship, Alia is rescued by a mysterious girl of extraordinary strength and forced to confront a horrible truth: Alia is a Warbringer—a direct descendant of the infamous Helen of Troy, fated to bring about an age of bloodshed and misery.

Two girls will face an army of enemies—mortal and divine—determined to either destroy or possess the Warbringer. Tested beyond the bounds of their abilities, Diana and Alia must find a way to unleash hidden strengths and forge an unlikely alliance. Because if they have any hope of saving both their worlds, they will have to stand side by side against the tide of war.

This review hurts me to write. Especially since I’ve been MIA for 3 months since having a baby I hate to start my reviews out with this one. But honestly, I just haven’t read many books that I really love since before baby girl was born. The few that’s I’ve read have let me down except for the graphic novels I read. But I ended up giving Wonder Woman 2 stars on Goodreads. Maybe it was just my preference because I saw a lot of people who gave it wonderful reviews but for me it did not pick up until about page 235.

I went in thinking I would love this book… it’s Wonder Woman and it’s Leigh Bardugo writing it. I love Bardugo’s other books. But it fell flat. I feel like the whole middle part of the story was drug out and slow. It felt like she wasn’t sure how to get from point A to Point B. I much prefer her fantasy writing style and her ability to world build.

Out of all the characters Diana was my favorite and then Alia’s sassy friend. Alia fell a little short for me. She was needy, lost, and never seemed to get her footing.

And I much preferred reading about the island Diana was from. Tek and her mother made more interesting plot lines and added better character dynamics to the story. I hope they’re on the island more in the next one.

I ended up giving this one 3 stars. For preference I might have given it a lower rating but Bardugo is an extremely talented writer and I think this book just wasn’t my cup of tea. However, I’m sure big fans of Marvel and of Wonder Woman would enjoy it.

A Court of Pages and Words

An exploration into the love of reading and a passion as old as time.

Dedicated to all kinds of stories.

Books. Reviews. And Other Things.

Reading After Ten
Rose Has Read That

I am a book lover, coffee drinker, and writer...

Exploring What Captivates, Inspires, and Intrigues.

A Book. A Thought.

"A Room Without Books is Like a Body Without a Soul"

Why Sleep When There Are Still Books to Read